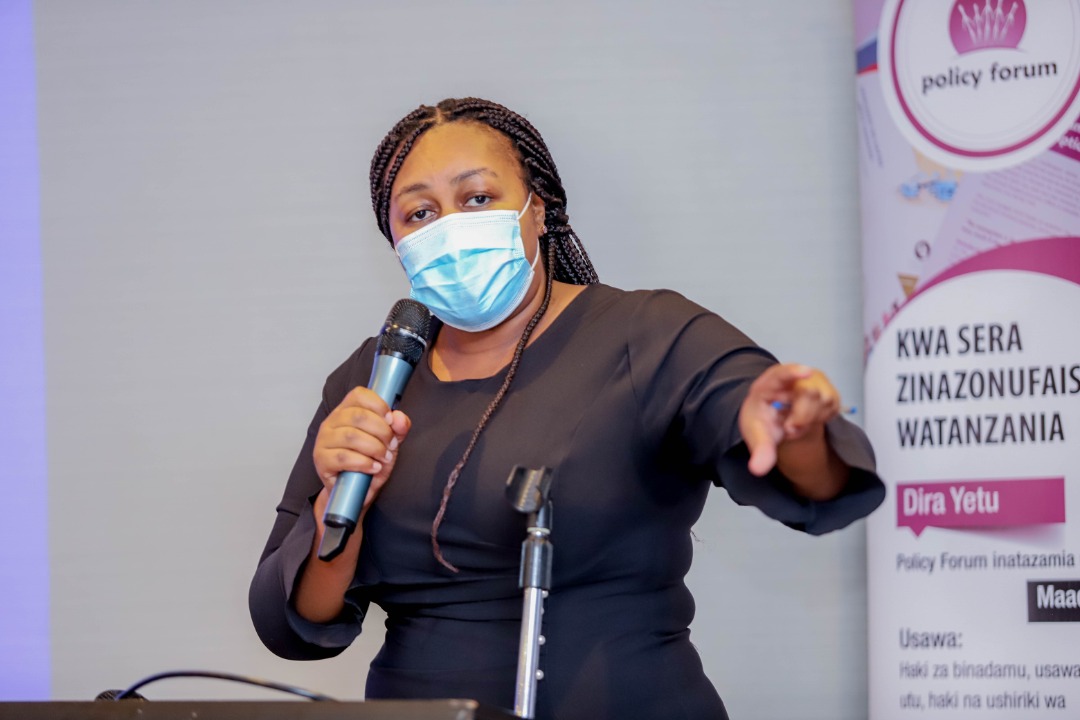 We are all victims of violence and harassment. Women in Legal profession, Media, Medical field, Religious Institutions and CSOs are all being harassed, and it is a deplorable phenomenon across the globe. Everyone who works deserves to be protected, irrespective of contractual status, including interns, volunteers, job applicants, and persons exercising the authority of an employer.

Global efforts against violence and harassment will only be effective and meaningful when we garner joint efforts from every member of the society.

Presenting at the Policy Forum February 26th, 2021 Breakfast Debate, Resident Associate at MS- TCDC, Advocate Harold Sungusia underlined that Tanzania has ratified 37 conventions and out of those ratified conventions, 30 are in force, 2 have been denounced, 5 instruments abrogated and for the past 12 months Tanzania has not ratified any conventions.

Adv. Sungusia further divulged that on June 21, 2019, the International Labour Organization (ILO) adopted the landmark ILO Convention No. 190. The process behind these instruments began in 2015, and with the recent global outcry against violence and harassment, the adoption could not be more timely or relevant.

The ILO Convention No. 190 recognizes that violent and harassment behaviors can constitute of human rights violation or abuse hence provides a clear framework for action and an opportunity to shape the future of work based on dignity and respect.

He elaborated that it is highly significant to ratify the ILO C-190, this would result to a broad protection of workers and other persons in the world of work regardless of contractual status and provide obligation to members to respect, promote and realize the right of everyone is free from violence and harassment.

Significantly, the representative of Association of Tanzania Employers (ATE) Ms. Anabahati Mlay indicated that employers' actions to solicit sexual corruption to provide employment are on the rise, it is becoming increasingly common, victims do not know what to do and what agencies to go to for help. Violence and harassment reduce work efficiency, lessen confidence in employees but also deprives them of the ability to give new ideas to the employer because of fear.

She then recommended that frontline CSOs, workers’ unions and trade unions can introduce regular, customised training. Effective training can reduce the prevalence of workplace harassment and violence. Training must be the norm, not the exception.

Ms. Mlay uttered that advocacy for reform of policies, laws, and ratification of C-190 should persist. Policies to address violence and harassment are underutilized and not sufficiently effective. Tanzania needs more effective policies and better implementation.

Substantially, Women in Law and Development in Africa (WILDAF) Program Officer Stephen Shishira articulated that media should be engaged to provide space for dialogue and best practice sharing. A problem shared is a problem halved. Let's work together to address the scourge of violence and harassment.

However, a common question raised insinuates that what a victim was wearing could have provoked the preparator of violence and harassment.

Adv. Sungusia rectified by saying, implying that women are sexually abused because of clothing is wrong. He made example of places like Pemba and Unguja where women cover themselves almost everywhere and there are still cases of rape. The problem is mental in men. Men should not be part of seeing sexual violence as their right instead be champions of eradicating all forms of violence against women and children.

Issues of gender violence have no partisanship elements. CSOs and other Non-State Actors are urged to advise the Government to approve the ILO Convention C-190.