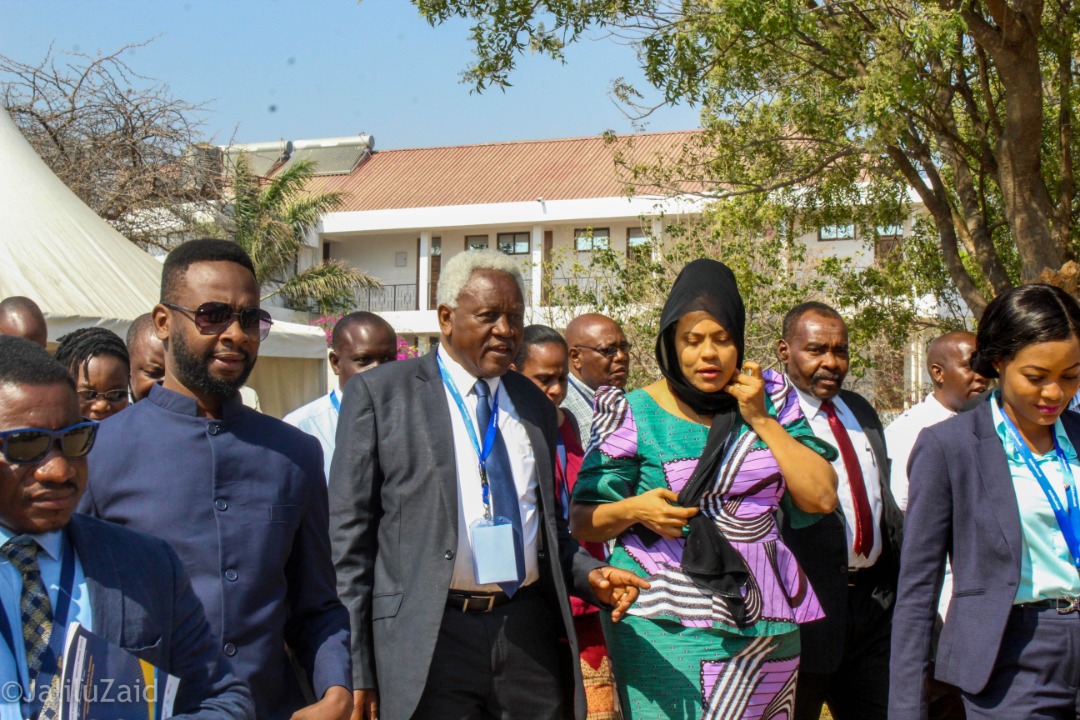 When mobilized, civil society - sometimes called the “third sector” (after government and commerce) - has the power to influence the actions of elected policy-makers and businesses. But the nature of civil society - what it is and what it does - is evolving, in response to both technological developments and more nuanced changes within societies.

Contributing to on a topic titled “How can Civil Society Organisations and government collaborate to enhance governance and accountability?, during the just ended ‘CIVIL SOCIETY ORGANIZATIONS WEEK 2018’, that was held in Dodoma, Policy Forum’s (PF) Coordinator Mr. Semkae Kilonzo said that as a network for quiet sometime now they they have been closely collaborating with the government in different developmental issues that touch citizens’ livelihoods.

According to Kilonzo, PF is a network that comprised over 70 Tanzanian civil organizations drawn together by their specific interest in augmenting the voice of ordinary citizens to influence policy processes that help in poverty reduction, equity and democratization with a specific focus on public money accountability at both central and local levels.

Kilonzo told a packed room that some of their major roles as a network have been to track and monitor public resources management through one of their tools known as social accountability monitoring (SAM). “By using this tool we are tracking how public funds are utilized from the source to the targeted common citizens.

He however, suggested that in order for a Network to be productive, workable and efficient for the common good of the citizenry, it should have three pillars namely: To have members who are committed, firm and dedicatedly participating in all day to day businesses of the network.

“More often this is not an easy thing as most of you might think. Sometime you can find the objectives and interests of one of the members in the network have different interests which opposite to those that caused him/her to join the network. This is a problem,” he noted.

He further urged “The objectives and interests of a member of a network need to go in line with that of the network.”

The second pillar crucial is for the Network to have strong and unshakable secretariat. “The secretariat needs to work professionally without shaking. And it should know the wishes of a member and those of a network.”

The third pillar of the net work is a board of directors. This should reflect the diversity of its members... widely disseminated to policy makers, civil society and the general public, among others. “A board needs to know the wishes, and objectives of members. And if possible it should warn, and even punish any member who goes against the laid down norms of a network,” he said.

Meanwhile, Mr. Kilonzo said that he was opposing the suggestion by some members who wanted financial resources to be regarded as the fourth pillar of a network; saying a network or an organization could operate successfully to achieve it missions without it.

He concurred with some civil organizations that start having their objectives as ideas in mind, and when they get money it is when will know what to do. He cited the English sage that says “When you have a good idea financial resources will automatically come. Adding:

My good advice to CSOs is that you first need to have your good idea on whatever you are intending to do, financial resources will come,” he suggested.

All in all, Policy Forum’s boss has called for unity among CSOs, community, and government as key stakeholders for the betterment of the entire nation. “United we stand, divided we fall.”

Policy Forum Board of Directors Chairperson Mr. Japhet Makongo revealed that the genesis for them (Policy Forum), to make social accountability monitoring was targeting to deliver quality service that ould reach a targeted common Tanzanian in time. “Accountability needs to be done by ourselves because we are also part and parcel of the community,” he said.

For his part, Executive Director of Foundation for Civil Society, which is mandated to support some CSOs with funds Mr. Francis Kiwanga commended the CSOs for good advocacy and service delivery to the people they were serving in collaboration of the government. “I can see the sector is now growing. What you now need to consolidate your network. You need to bridge the shrinking spaces if are existing among yourselves for the common good of the bigger masses,’ he urged.

He further said that his Foundation has minimized its support to 263 CSOs in 2017 from 653 CSOs in 2014 due to financial status.

Sara Mwaga from anti female genital mutilation network (AFNET), a member of Policy Forum called for joint efforts and same language among CSOs in order to bring changes and benefits to their members. “The issue of joint efforts is unavoidable so as to enable a member to get his rights,” she said.

She warned some secretariats of some CSOs to act as semi-gods, and the members are regarded as secondary.

Chairman of Parliament Committee of Regional Administration and Local Government Affairs, who also doubles as Bukoba Rural Member of Parliament Advocate Jackson Rweikiza said that CSOs were partners with the government to bringing development to the citizenry, and not foes.

“When executing your duties, you should not be in confrontation with the government of the day smoothly that is when you will succeed. And if you do vice versa you will not succeed in your missions,” he counseled.

Meanwhile, Adv. Rweikiza told CSOs to graduate and become sustainable even when donors pullout after phasing of the project.

Special seats MP of the National Assembly, Martha Mlata also gave a piece of advice to CSOs to have good language when working with government officials in their respective areas to avoid confrontation. “Other CSOs come with readymade answers and act like political parties. Avoid such behaviour,’ she warned.

Ms. Mlata has urged CSOs also be transparent in their daily undertakings so that they become trusted by the government of the day.

Director of Sector Coordination President’s Office Regional Administration and Local Government, Dr Andrew M. Komba said that the government was recognizing the contribution by CSOs in the country in the different sectors.

“We are happy with the way you operate; let’s increased the integration so as to remove the existing small challenges among us,’ he called.

Meanwhile, Dr Komba has called upon all district council directors across the country to collaborate and work with CSOs operating in their respective areas as the circular wanted them to do for the benefits of the citizenry.

NGOs Acting Registrar Mr Leonard Baraka has told the CSOs that if they wanted to work smoothly without colliding with the government, they need to work within their laid down code of conduct. “You need to establish a sector that is transparent, vibrant and accountable.”

Another school of thought has urged CSOs that if they wanted to be successful in their daily duties, they need to have a “consistent, principled and committed stand in the interest of the large masses and for human values and causes”.

The large masses are the working people in villages and towns, often exploited and oppressed, but who are central in the struggle to regain and improve their livelihoods, dignity, and power. Thus true NGOs and other civil society organizations, worth their name, should be broad-based membership organizations of working people, the wananchi, not of the elite.

The aim of the struggle, through promoting different perspectives and fostering open, protracted public debates, is development of alternate ways of doing things, effective participation in democratic institutions of the state and to bring about “popular livelihoods, popular participation and popular power.

This is, indeed, the essence of democratic governance. As stated earlier on, CSOs, including NGOs, FBOs and CBOs, were formed with specific objectives. Individual CSOs have also organized themselves into networks and coalitions at local, district, and national levels with common objectives.

Reference to civil society in official documents in recent years is an indication of the recognition of Government that development is a participatory process. Indeed, CSOs articulated their roles in development when they formed themselves. It is also through the space provided by Government that CSOs participated in framing the roles appearing in policy documents.