Where are We with Revenue Management in the Extractives Sector? Stakeholders Debate on the Losses and Gains for Tanzania 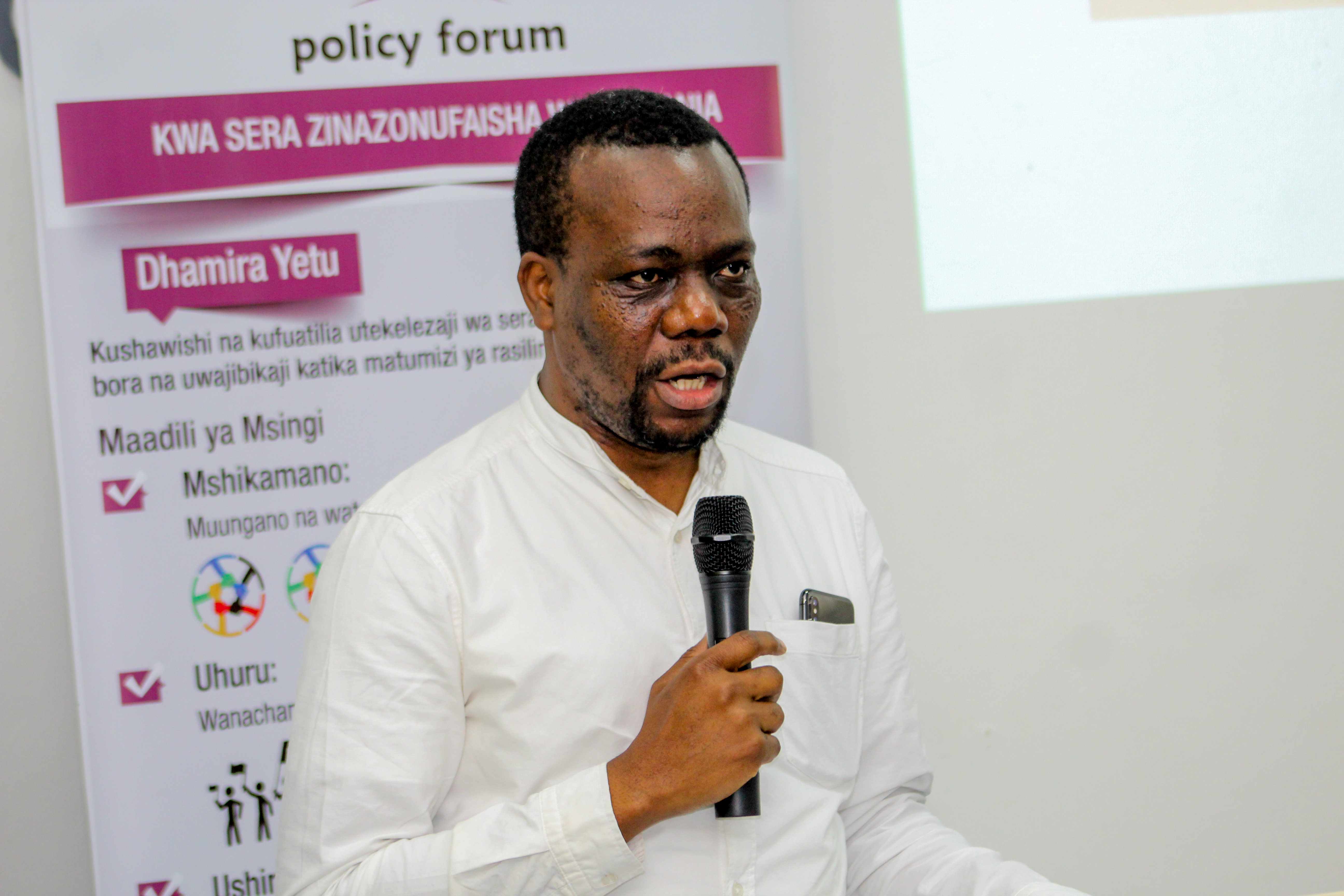 It is no doubt that whether you read articles or analyses related to extractives industry of Tanzania you will be bombarded with banal phrases such as ‘Tanzania is endowed with immense resources including hydrocarbons and solid minerals like gold, diamond, iron, tanzanite and natural gas.’ The main challenge for the country, however, has remained management of the revenues emanating from the extractives sector.

The 2017 Resource Governance Index which assesses quality of governance in licensing, taxation, local impacts and state participation reported that Tanzania performed poorly in the revenue management of oil and gas sectors by scoring 40 out 100.

Reflecting on what should be done by the stakeholders and government to improve governance of the extractives revenue, transparency and accountability, Policy Forum and HakiRasilimali joined efforts to organize a morning debate dubbed as the ” The Extractives Revenue Management in Tanzania : Where are we with Transparency and Accountability?”. The debate which took place in Dar es Salaam in the early hours of July 26, 2019 included Dr Genuine Martin from University of Dar es Salaam as the main speaker and Hon. Zitto (MP) as the discussant.

Speaking during the discussion, Hon. Kabwe argued that there is a problem in the management of extractives revenue in many developing countries including Tanzania by illustrating the current loss of revenues in the sector. He said for the financial year 2019/2020, the government is expecting to collect Shs 315 billion from the extractive industry despite being able to only collect Shs 230 billion as royalties from the mining sector in the financial year of 2017/2018.

He cited that between 2016 and 2018, the total mining revenue collapsed by 32%, from Shs 1.3 trillion as a total collection from the mining sector to Shs 867 billion. This goes in line with 11% drop in exports of gold or 10% drop in exports of other minerals.

Hon. Kabwe explained the drop in the exports of gold contributes to a loss of forex revenues of around US $ 200 million between 2016 and 2018 which can be calculated to the loss of the tax revenues of around Shs 433 billion. He emphasized that the loss is more than what the government is expecting to get from the settlements with the Barrick Gold Corporation.

He said the loss of revenues in the extractive industry calls for a thorough and critical “but objective” analysis of the last three years (from 2017 to 2019) to look at the impact of the changes brought in the extractive legislative framework. If government accepts an independent investigation on the gains and losses of its makinikia intervention (the ban on exportation of mineral sands to be smelted outside Tanzania), we can learn from such decisions”. He insisted that if the government doesn’t, “I call up on the CSOs to see the possibility of bringing together a team of experts to investigate the three years of the makinikia saga and come forward with recommendations so that we do not repeat mistakes.”

“The government aimed the interventions for optimal benefits for the country but the outcomes have not been great. What is the problem?” Hon Kabwe asked.

According to Hon. Kabwe, the interventions that were taken by the government were wrongly applied as it did not address the most critical fundamental problem in the extractive industry which is the international taxation system.

He claimed that if the developing countries are not addressing the issue of international taxation system, they will continue to lose from their natural resources. It is through the international taxation system that multinationals end up deciding where to pay taxes. He said this is not a problem exclusively faced by Tanzania and that we should cooperate with other countries to address the issue of where the taxes are being paid by multinational corporations. He advised the government to sign the Conventional on Mutual Administrative Assistance in Tax Matters (CMAATM) which provides for administrative co-operation between states (member states) in the assessment and collection of taxes, exchange of information and recovery of foreign tax claims.

The report which probed transparency and accountability in the extractives sector presented by Dr Martin shows the disclosure of mining contracts is minimal. The publicly available contracts are only three Production Sharing Agreements (PSAs) of (2004, 2008, 2013) out of 26 PSAs on Tanzania Petroleum Development Corporation (TPDC) website. However, speaking during the EITI Global Conference, the Minister for Minerals Hon. Dotto Biteko (MP) said that the government is in the process of establishing a portal for mining contracts which will be displayed on the Ministry of Mineral website. The portal will enable the government to publish and annotate mining contracts.