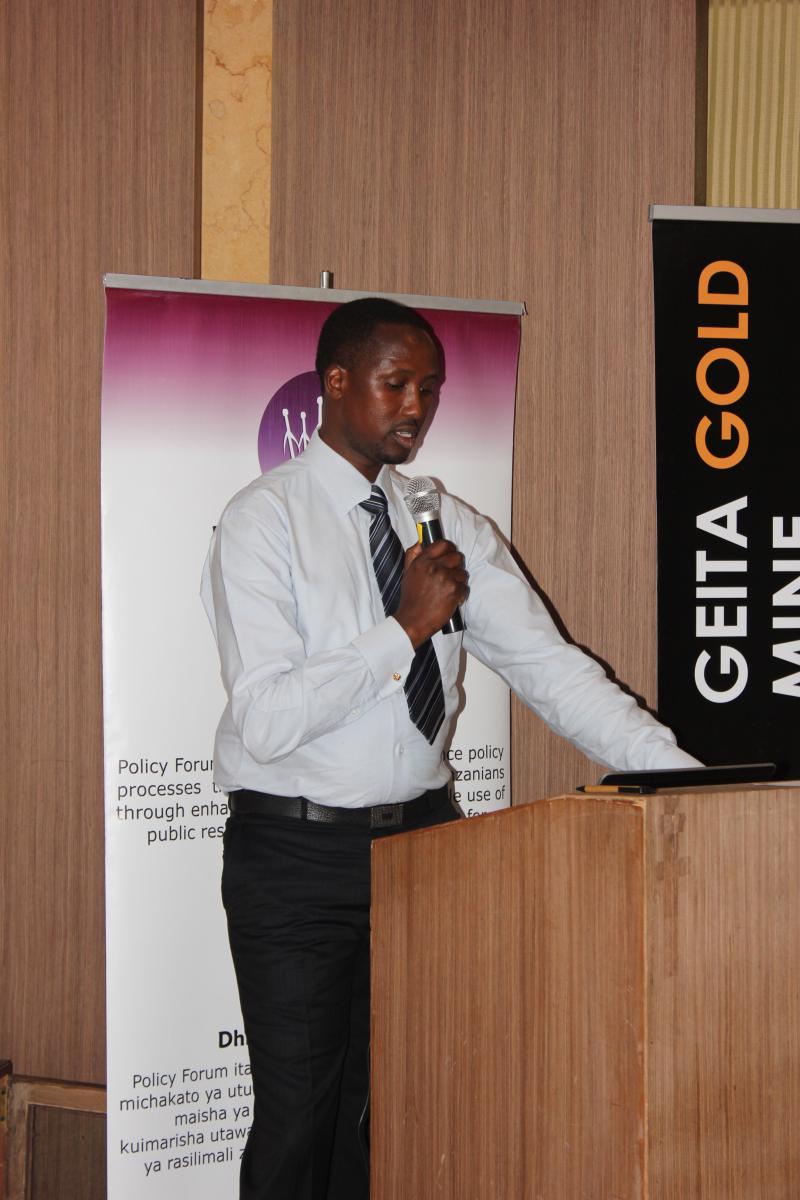 ​​​​Stakeholders have urged the government in co-operation with other stakeholders to establish a legal framework for Corporate Social Responsibility (CSR) practices as to ensure its effective implementation and compliance for the benefit of both national and international interests.

Speaking at the Policy Forum breakfast debate on 27th February 2015 at New Africa Hotel, Ms. Winfrida Onesmo, from the Arusha NGO Network (ANGONET) which addresses issues concerning natural resources and environmental conservation, said CSR as stipulated in the 2009 mining policy of Tanzania is still fragmented and lacks focus on how interests of Tanzanians and business communities are ensured.

Onesmo was presenting on a study which ANGONET conducted to assess the situation of CSR in Tanzania’s mining industry with a specific focus on Tanzanite which according to her found that there was endemic poor governance (e.g. secrecy in contracts) and that the service levy of 0.3% of annual turnover of mining companies supposed to be paid to the local authorities does not seem adequate to finance public services to surrounding communities.

“Once the CSR legal framework is in place, CSOs in collaboration with the Government and private sector can establish a national awareness platform to strengthen the ethical and moral conduct of the business,” she recommended.

She further suggested that the central and local Governments to integrate CSR in their development plans and establish a clear strategy for CSR so as to reverse the current practice where CSR is simply being applied as a branding and marketing strategy by Mining Companies.

However, Simon Shayo, the Vice President Sustainability at Geita Gold Mine Tanzania (GGM), presented on the practical experience of CSR in his company noting that in 2012 and 2013 alone, GGM contributions totaled over Tshs 450 Billion Tanzanian Shillings in taxes and royalties to the Government, making GGM one of the single largest and most compliant tax payers for Mining Sector in Tanzania, both in 2013 and 2014.

He stressed that GGM has agreed to pay 0.3% of its annual turnover as Service Levy to the Geita Town Council effective from the 1st of July 2014 instead of the US$200,000 paid in lieu of all local taxes provided under the original MDA of 1999.

Mr. Shayo went on to say that AngloGold Ashanti/GGM believes that communities should be better off for Geita Gold Mine having been there as his company has, through the Kilimanjaro challenge against HIV fund, built a Voluntary Counselling and Treatment Centre in Geita Town in support of government initiatives to combat HIV and AIDS and has also signed a five-year contract worth over TZ 680million to support Lake Victoria’s first medical boat.

He however mentioned some of the challenges which they face as being;frequent changes of legal and policy frameworks, falling gold prices and illegal/artisanal/small-scale mining.

During the plenary discussion participants insisted that CSR should be seen as mutually beneficial to all stakeholders and therefore to achieve this, the government needs to come up with a clear legal framework to support it.