The Education We Want: A Critical Analysis of the Education and Training Policy (ETP) 2014, Issues, and Recommendations 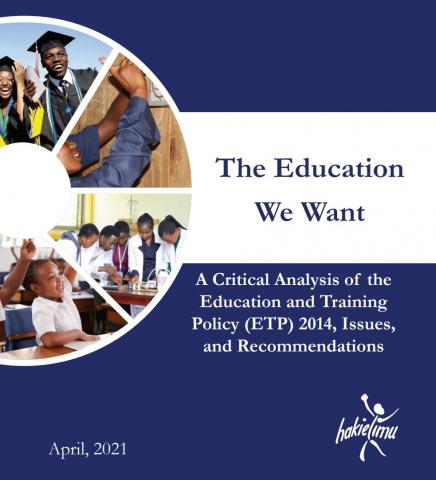 The Education We Want: A Critical Analysis of the Education and Training Policy (ETP) 2014, Issues, and Recommendations

The Education We Want is a report of a critical analysis of the Education and Training Policy (ETP) formulated and adopted by the Government of Tanzania in 2014. The ETP 2014 aimed to guide education provision from pre-primary to tertiary levels along with vocational, non-formal, and special education sectors. Since its adoption for implementation, there has been a concern among education stakeholders that it does not meet the current demands of education and training in the country required to strengthen economic, social, scientific, and technological transformation.

Besides, the Policy has been criticised for its inability to address challenges related to access to educational opportunities and quality of education and training in the country while at the same time developing adequate and competent human resources to transform and sustain the country’s development. These criticisms, among others, were well received by the Government, which resulted in the decision to review the policy. This review, therefore, comes as a contribution to the review process. The analysis contained herein addresses policy issues related to the Policy document itself and the implications of the statements about Policy implementation. The analysis has also highlighted a number of other critical issues that affect the education sector which needs to be addressed alongside the Policy revision process.

The purpose of the analysis was to develop a document that would form a strong foundation for advising the Government and policymakers in the Policy review plan so that an appropriate Education and Training Policy is formulated, adopted, and implemented. The analysis was conducted by the Technical Policy Review Committee (TPRC) formed by HakiElimu, which comprised of experienced experts from education sub-sectors such as pre-primary, primary, secondary, teacher, technical and vocational, adult and non-formal, higher, and special needs. A comparative approach was adopted where policy documents from selected countries were consulted and compared for drawing lessons to improve the policy review process in Tanzania.

This report consists of five parts. The first and second parts present an introduction to the basic concepts, theory, methodology, and context used in the critical analysis of the ETP 2014. The analysis was guided by two models/theories, namely, Majone´s Model (argumentation, persuasion, evidence) and Fairclough´s Critical Discourse Analysis (CDA) Model. Majone’s (1989) model was used because it emphasises that policy analysis involves argumentation and persuasion based on available evidence. This model, therefore, guided the team to find evidence for scientific argumentation and persuasion. On the other hand, Fairclough´s CDA model provided tools for critical policy discourse analysis. These tools helped the analysts delineate the policy silences and the nature of policy discourses. The third part of the report provides the analysis findings in terms of the strengths and weaknesses based on the policy’s organisation, structure, and content. Findings indicate that the ETP 2014 has the following strengths: First, the policy provides an assessment of the education sector (technical, higher, secondary and primary) situation at the time of its formulation and identified the major challenges for readers to understand the past, present, and the next direction that the policy would provide in terms of education development; Second, the strength of the policy is derived from the merge of the Education and Training Policy (1995), the Technical Education and Training Policy (1996), Higher Education Policy (1999) and ICT for Basic Education Policy (2007). This forms a single Policy document that covers all education levels and sub-sectors, the promise which was not satisfied; Third, the Policy describes the importance of having a national education and Training Policy (Chapter 2 of the ETP 2014) and then provides the vision, mission, general objective and specifics of the Policy: Fourth, the Policy is well organised. It provides policy issues and a short but precise description of the issue, followed by the Policy objective for that issue, and the Policy statements; Fifth, the Policy provides a separate chapter for the relationship between the legal framework and the Policy itself (Chapter 4). The relevant Acts that would affect the implementation of the Policy are provided including the mention of the need for amendments to make the policy work. However, they were not amended until now; Sixth, Chapter 5 of the Policy provides an institutional framework for implementation and evaluation. However, these were not specified for each organ yet the general actors are provided.

Similarly, the analysis identified several weaknesses of the ETP 2014 that need to be considered when reviewing the Policy. The first weakness observed was the inconsistency between national philosophy and education and training policies. The other weakness was that it seems ETP 2014 was not based on adequate research evidence for each education subsector. Third, the Policy fails to provide directions for each of the problems raised, but it offers many promises that are difficult to implement. Fifth, from the view of the Incrementalism Theory, the ETP 2014 is less incremental as it differs significantly from its predecessor, the ETP 1995, and fails to assign responsibilities to specific education stakeholders to enhance accountability in implementation. Likewise, the Policy focuses less on adult and non-formal education, although they offer opportunities to increase access, equity, and relevant tailored education. Eighth, any education policy is supposed to be backed up by a legal framework for its implementation. However, the ETP 2014 was not followed by amendments of relevant Education Acts that were promised in Chapter 4. Ninth, the policymakers did not separate the content of the Policy documents in the relevant education subsectors/levels. Other weaknesses are the policy’s reliance on quantitative data only, lack of a methodological framework for its evaluation, lack of strategies for its implementation, lack of emphasis on health, physical education, and sports, and over-emphasis on state dominance and centralisation rather than decentralisation in the provision of education. Finally, the analysis showed that ETP 2014 did not provide specific policy objectives for the different levels of education.

Besides, the analysis identified key policy issues that need to be addressed in the Policy statements compared to the practice in selected countries and research evidence. The policy issues covered the areas of the system and structure of education and training, schooling age, compulsory education, quality of the curriculum, teaching materials and aids, library services. Other areas are science and technology education, the language of instruction, student assessments and evaluation, access and equity, human resources, management and administration of the education and training sector.

The fourth part of the report provides key issues and recommendations required to shape the future of education and training in Tanzania through the upcoming education policy. Having identified the gaps in the Policy document and processes, the analysts provide recommendations for the upcoming education policy. The recommendations focus on the kind of education required to prepare citizens to cope with the dynamic and fast-changing world. The key issue is the provision of quality education at all levels of education. In this part, the report addresses key policy issues identified in 21 domains developed by HakiElimu that reflect the entire education sector in the country. A consideration of each policy issue provides a light on the outcome of comparative policy analysis conducted to provide further insights into the strengths and weaknesses of the ETP 2014.

It is our belief this report provides a comprehensive analysis of the country’s education context and the required reforms in the education and training sector. We also believe that the report contributes to the understanding of education policy in Tanzania. The report is evidence-based, relevant in informing national policy-making and implementation processes and is intended to be a strategic tool that can assist the Government of Tanzania and key stakeholders in education to realise policy priorities. Moreover, the comparative analysis conducted concerning policy-making systems in selected African countries and beyond provide examples of policy initiatives that serve to contextualise and inform education policies in Tanzania.

This report was prepared and produced by HakiElimu