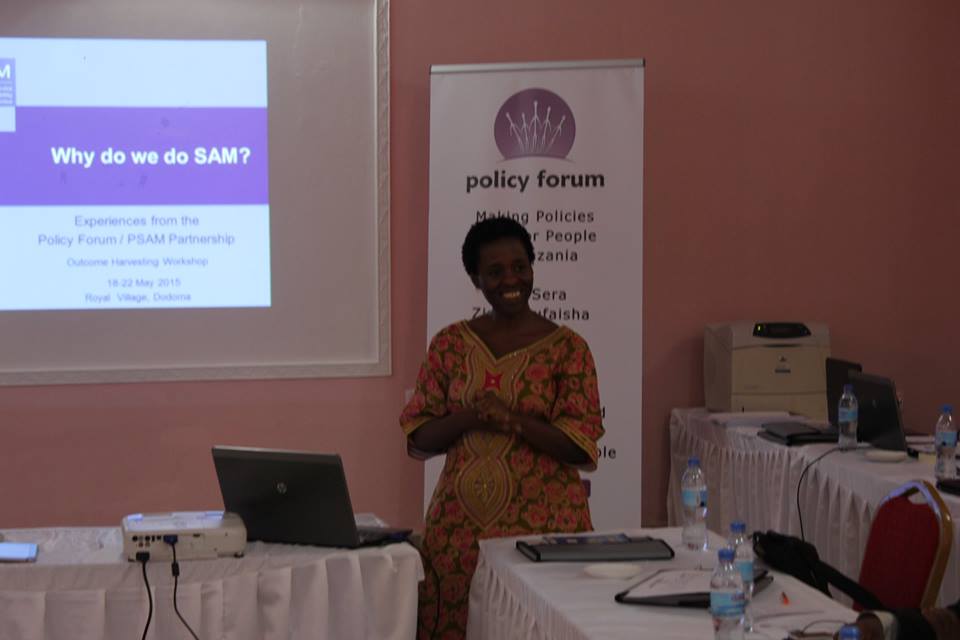 Engaging with government officials during Social Accountability Monitoring (SAM) interventions is key to harvesting good outcomes.This was emphasized by SAM practitioners during a five-day workshop organized by Policy Forum in collaboration with the Public ServiceAccountability Monitor (PSAM), Agricultural Non-State Actors Forum (ANSAF) and ActionAid-Tanzania that took place in Dodoma on the 18th – 22ndof May 2015.

The workshop brought together Policy Forum’s SAM partners and other individual members undertaking SAM in their organizations to train them on ways to document the impact of their work and to capture their stories and challenges they face.

Nemence Iriya-Director of MACSNET, a participant at the workshop said that, in their SAM intervention they normally involve council officials by making them part of the SAM Council Implementation Team (CIT).The officials are trained on the SAM concepts and tools used so that they can be brought onboard in the process and be influential in helping the SAM team get requisite documents during the SAM analysis stage.

The value of this approach was reinforced by Catherine Mulaga-MIICO who gave the experience of her organisation and the work it undertook in Kyela, Mbeya last year where they faced challenges accessing some of the documents for their SAM analysis, namely, the Financial and Audit reports and Full Council minutes.The documents were said to be “confidential” and the council officials were reluctant to release them as they believed disclosure would have adverse impacts on the 2014 local elections. MIICO were initially asked to wait until after the election but due to the good relationship that they had developed with the officials and councilors who were also part of their SAM CIT, they were able to access the documents which they then used in their SAM analysis and used the information during their feedback meeting with the District Executive Director (DED) who promised to work on their recommendations.

After the workshop, the documented cases will be shared with the Prime Minister’s Office - Regional and Local Government Authorities (PMO - RALG) and with the specific sector ministries concerned, said Richard Angelo- Manager of Capacity Enhancement at Policy Forum.